To put some additional attention to my email, I’d like to add some shape characters to the subject line such as a star or heart.

Is this possible and if so, which shapes are supported in the email subject line?

Creating a striking subject one way or the other is a question which comes up every now and then. For instance, being able to use color in a subject is an often heard request in this aspect as well.

While it is possible to do this from a technical perspective, there are some other things to consider as well.

Even though you can use various symbol characters in a subject, first a couple of little warnings about doing so;

In general, you won’t run into any technical limitations when you use them in an internal Exchange environment with Outlook clients. As for annoying your colleagues… well, good luck with that ;)

Not all characters look good in the subject either.

Anyway, if you want to go this route, the easiest way to do this is to use the Character Map application.

To start the Character Map application, simply type “Character Map” in the search field of the Start Menu.

You can then either browse in the font "Arial" or "Arial Unicode MS" until you find a character that you want to use. Select the character and use the Copy button in Character Map and then paste it in your subject line (keyboard shortcut: CTRL+V).

You can find even more characters and emoji in the “Segoe UI Emoji” font but be aware that not all versions of Windows support all emoji. 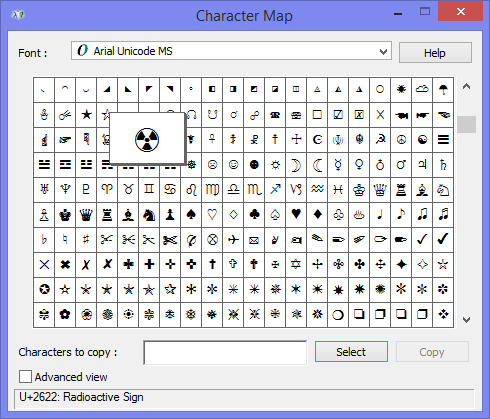 There are many characters which you technically can use in your subject but actually doing so might not always generate the response you expected.

Useful character use and alternatives

The actual annoyance usually comes from overusing them. It is of course perfectly ok to use it for a special birthday wish, a Christmas dinner invitation or another very unique event. Mail doesn’t have to be boring either!

If you come up with a good usage policy between your contacts/colleagues, it could actually also become quite effective without risking annoying each other. For instance, agree on a limited set of characters that may be used and that it always has to be the first character in the subject line, followed by a space.

An example would be to use use the phone character to indicate that you are relaying a phone message while your colleague was away from his or her desk.

However, for other circumstances, there might be better alternatives though such as setting a message flag, priority or sensitivity. In addition, you could also use keywords in a subject.