Now that I know how to insert emoji into Outlook, a few things are still a bit unclear to me;

These are excellent and justified follow up questions. While it is not impossible to change the skin tone, gender or profession of emoji via the Symbol dialog, doing so isn’t that easy and shows the limitations of the current method to insert emoji in Office applications.

Luckily, things are a lot easier when you are using Outlook on Windows 10. In that case, you can use the Emoji Panel.

As mentioned before, things have become a lot easier on Windows 10 by using the Emoji Panel.

You can open the Emoji Panel via one of the following keyboard shortcuts;

All of the gender and profession variations of the emojis are already listed so you can easily select them. To change the skin tone, select the People category at the bottom and use the circles above the icons. In Windows 10 version 1803 and earlier, click on the Skin Tone Selector icon in the top-right corner. 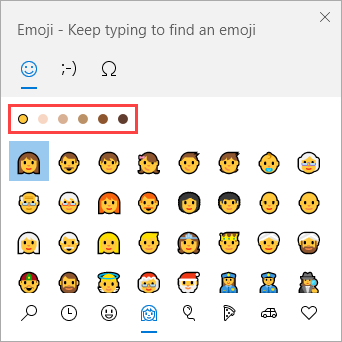 Symbols dialog: Changing the skin tone of an emoji

To change the skin tone of the emoji representing people; 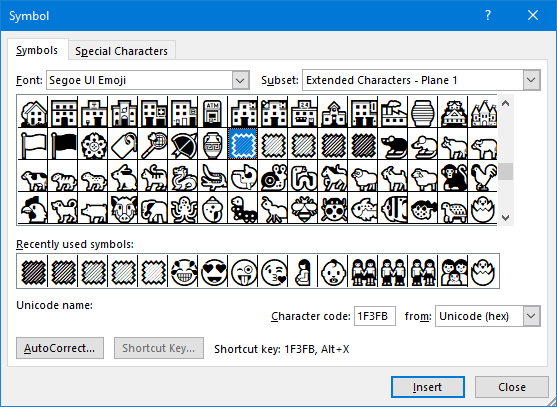 The skin tone emoji themselves look like a patch from a quilt.

An alternative way of applying a skin tone to an emoji that supports it, is typing the skin tone Codepoint directly behind the emoji in your message (so without a space in between) and then press ALT+X. The Codepoints for skin tones are;

Setting a skin tone for your emoji isn’t that hard but could be made easier.

Symbols dialog: Changing the gender of an emoji

Changing the gender of an emoji is where things are getting tricky for the Symbol dialog. Lets go by the example or the “Happy Person Raising One Hand” emoji.

As you can see, it is possible to do this via the Symbol dialog, but it is anything but easy and straightforward.

This would be relatively simple if you didn’t need 2 invisible characters as well.

Did you think that specifying the gender of an emoji was unnecessarily hard already? Creating a profession emoji is even harder as you’ll need to know the separate profession emoji as well.

Did you know that profession emoji consisted out of multiple emoji that look completely different from the end result? Oh, and is also contains 2 invisible emoji…

Again, it is possible but not very convenient to do this via the Symbol dialog.

Also, needing to know which profession sector emoji to combine it with isn’t as straightforward, let alone finding it between the more than 1000 emoji.

Add to that, that for some professions, there is already a profession emoji (like the Construction Worker emoji) which requires the gender method instead, and things get downright confusing.

Emojipedia.org is a great website to find any emoticon and verify its meaning. It also provides a graphical representation of the emoji for all major platforms so you’ll also know what it looks like when the recipient reads your message on an iPhone or Android smartphone.

Although it may look like you are copying and pasting an image, you are actually pasting the corresponding Unicode character and Outlook will immediately convert that to the colorful emoji representation so you won’t be sending the actual image. 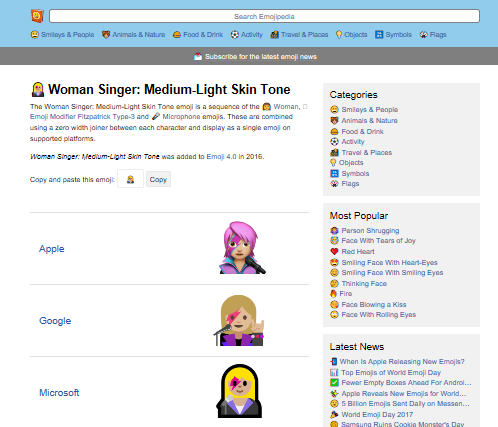 Emojipedia also gives you a sample of how the emoji looks on different platforms like from Apple and Google.

The Emoji Viewer app for Windows 10 gives you a sorted graphical view of all the emoji that Windows support.

The male and female emoji are already created for you as well as male and female versions of all the supported professions. Changing the skin tone can be done with a single click.

Once you’ve found the emoji which you’d like to insert, you can copy it from the app (via a right click menu) and paste it in Outlook or any other application which supports emoji.

The app also shows which emoji you’ve recently used and you can create a favorites list by pinning the emoji. 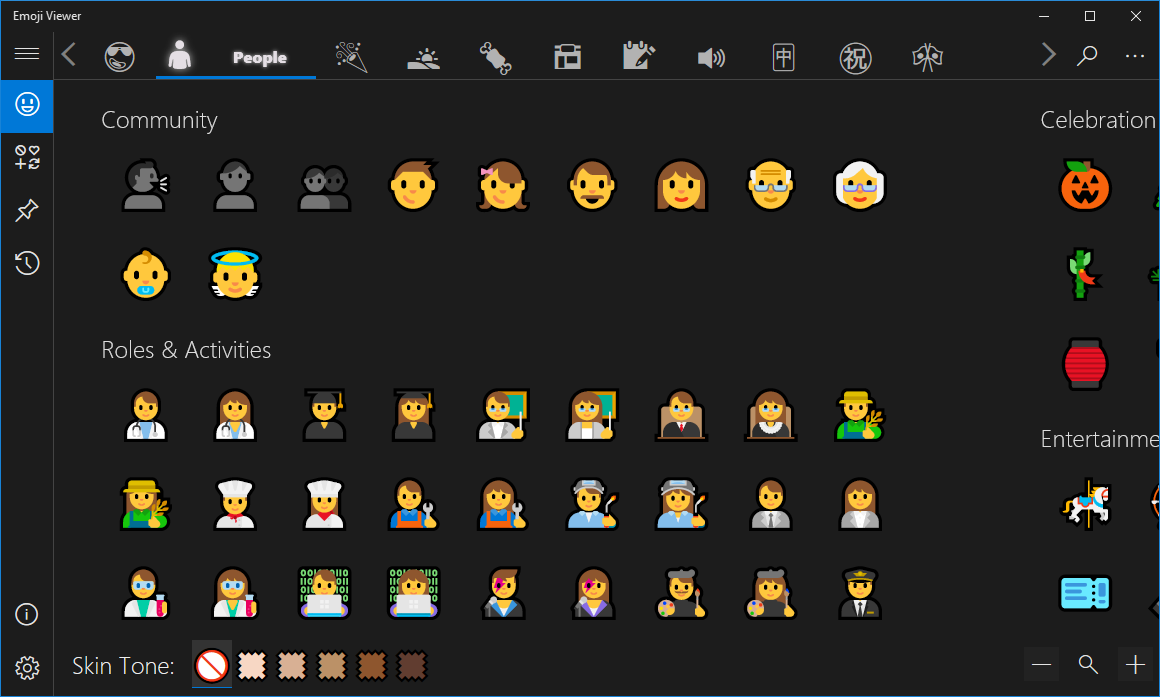 The Emoji Viewer app makes it quite easy to find, select and customize the emoji that you want.