Whenever I mark a message for follow up with a flag, I see that message 2 or even 3 times in the To-Do List. If I clear the flag the other items remain and only go away after a longer period of time or when I restart Outlook.

Why is this and how can I get rid of these duplicates?

This issue is due to the fact that Gmail also has a special “All Mail” and “Starred” folder in addition to your Inbox folder. When you connect to Gmail via an IMAP account, you can either unsubscribe from these folders or apply a filter to your To-Do List view. POP3 connected Gmail account do not have this issue.

How are duplicates caused via the “All Mail” and “Starred” folder?

As the search nature of these folders only exists in the web interface of Gmail, connecting to Gmail via an IMAP account causes you to download the messages listed in these folder again (which can more than double the size of your pst-file). As these are separate items in Outlook, the To-Do List will list them separately as well.

When you clear a flag on one message in Outlook, these changes sync back to Gmail. As this is only a single message in Gmail, as a result, they will no longer show up in the Starred folder or show as flagged in the All Mail list on-line either. Upon synching the All Mail and Starred folder in Outlook, these messages will be cleared there as well and the To-Do List won’t be showing them anymore either.

Solution 1: Unsubscribe from the “All Mail” and Starred folder

A quick and easy solution for this issue would be to unsubscribe from the All Mail and Starred folders. Detailed instructions for this process can be found in; Gmail accounts and disproportionally large pst-files

If you’d like to keep those folders in Outlook, then you can also apply a filter to the To-Do List to hide the duplicate items. The filters that you need to add are; 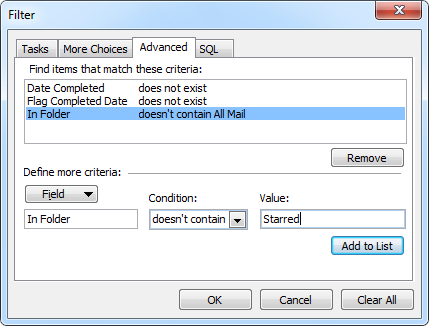 Filter out the All Mail and Starred folders to prevent duplicate To-Do items.