I've added a couple of wrongly spelled words to the custom dictionary by mistake.

How can I remove them again?

The default dictionary where you store your own words in is in a file called CUSTOM.DIC. You can edit it from within Outlook or by directly opening it in Notepad.

When you are using Outlook 2013 or Outlook 2016 and are logged in with a Microsoft Account via File-> Office Account, then this file is called RoamingCustom.dic and is part of your cloud based Office profile. In this case, you can only edit it from within Outlook itself as it is not saved as an editable file on your computer.

Language specific dictionary files are called default.dic by default and can only be edited by opening the file in Notepad and not from within Outlook. 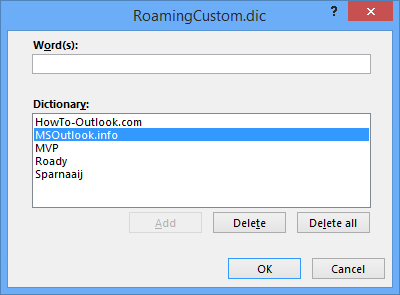 Note: You can’t actually edit a word via the above dialog. You’ll need to remove it and add the corrected word again. Editing is possible via the Notepad method (except for the RoamingCustom.dic file) when you open the file from the location below.

Language specific default.dic files are stored in the same basis location as above but the folder is called Spelling instead of UProof or Proof. Within this folder, you’ll find a subfolder representing each language that you have installed for Office.

For example, the default.dic file for United States English is stored in:
C:\Users\%username%\AppData\Roaming\Microsoft\Spelling\en-US\

The Custom Dictionaries dialog reveals the location of your dictionary files except for RoamingCustom.dic. (Click on image to enlarge)

Note 1: The name of the folder for CUSTOM.DIC is different because since Outlook/Office 2007 the CUSTOM.DIC file is saved in Unicode where the previous versions of Outlook/Office used the ANSI format. The U in UProof stands for Unicode.

Note 2: If you are in an organization, your network administrator can choose to deploy a CUSTOM.DIC file which for instance already includes some words which are not in any default dictionary such as the company name and internal abbreviations.