Have you discovered the Mini Translator already?

It is a quick way to translate a word or a text selection and can even be used in the Reading Pane without the need to open the Research Pane or the message itself.

The Mini Translator is a new feature in Outlook/Office 2010 which can instantly translate a word or a text selection and display the results in a ToolTip.

This is an improvement over the Outlook/Office 2007 “Translation ScreenTip” feature which could only translate single words.

How to enable and use the Mini Translator

To enable it, you do have to open a message first but after that it works from the Reading Pane as well for all messages;

Now when you select some text, and hover with your mouse over the selection it will directly display the translation in a ToolTip. If you hover on a single word, it will translate it directly, without the need to select it first.

Initially, the ToolTip will be translucent. Hover on it with your mouse to make it opaque.

Extra Tip: Even if you do not need it to translate the text for you, you can still use it to read the text out loud (in a bit weird computer voice though).

How to set default language to translate to

You can set your default language to translate to, in the Translation Language Options dialog; 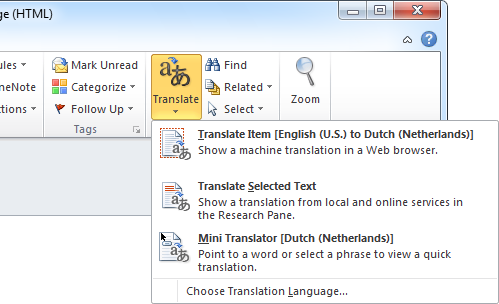 The Translate menu can be found on the Ribbon for a message which has been opened in its own window. Once enabled, the Mini Translator will remain active.

How the “From” language is detected

You might notice that in some cases the Mini Translator will simply display your selected text and not a translation of it.

This is because there isn’t a true intelligent language detection system behind the Translate feature. Instead, the language selection is based on which language is defined in the message body (in the HTML source).

For instance, if the selected text is marked as English but actually is German then the translation service will still interpret that as English and your translation will fail. 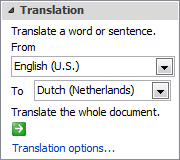 In that case, you’ll need to use the regular Translate feature by right clicking on your text selection and choosing Translate or by pressing the Research icon

in the Mini Translator dialog. This will open the Research Pane where you can manually select the To and From languages.

For Plain Text messages, or when no language is specified, it will fall back to your default editing language or English.

As mentioned before, the Mini Translator comes forth from the Translation ScreenTip feature in Outlook/Office 2007 which only translate single words. To enable this;