In previous versions of Outlook, if I wanted to embed a link <a href=...>) to a picture instead of embedding the actual picture in emails, I would go to Tools-> Options-> Mail Format tab-> Internet Format button and in the dialog under the heading "HTML options" I would uncheck: "When an HTML message contains pictures located on the Internet, send a copy of the pictures instead of the reference to their location."

But this heading and checkbox don't exist in this location on Outlook 2007 or Outlook 2010.
Has it moved to a new location?

It appears the option or feature still exists, as another user with Outlook 2007 that upgraded from Outlook 2003 who had that option unchecked prior to the upgrade sends mail with links instead of pictures just fine.

I'm guessing it was stored in the registry somewhere and was picked up after the upgrade, but how can I with a clean install have the same setting?

The option to change whether Internet pictures will be linked instead of embedded in a message can only be changed via the Registry in Outlook 2007 and later.

You’ll need to edit or create the following Registry key and value;

With a value of 1 or if the value name is missing (for Outlook 2007 and Outlook 2010), you'll include the picture with the message instead of as a link.
If the value is set to 0 you'll send a link.

Note: The value name contains spaces and capital letters; you must include these as well.

Change of default in Outlook 2013 and later

This can be particular troublesome for signatures which include images, especially when they are being generated by a script in corporate environments.

A solution would be to explicitly set the this Registry key to 1 or by placing the signature images on a web server reachable by the recipient (with a corporate logo, this usually is the better way to go). This will also keep the messages smaller.

You're correct, when the option was set in a previous version of Outlook, the setting is migrated during an upgrade. 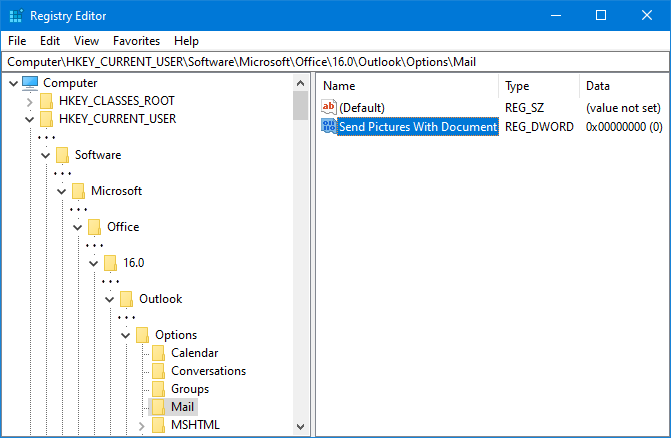 Linking to instead of embedding a picture in a message, requires a Registry modification.