Funny enough, I do see my Notes folder in the Mail section in OWA, but I can’t seem to create a new or modify any of my existing Notes.

How do I do this?

Outlook Web App (OWA) doesn’t offer support to create new or modify any existing Note items. Actually, it was planned to have access to the Notes folder to be removed completely in OWA 2010 but it is still there, even in OWA 2013.

Alternatives are to work with Tasks or to use OneNote instead. 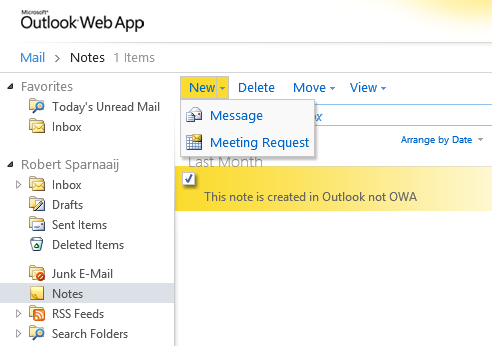 The Notes folder was already the “Odd One Out” in the Mail Navigation of OWA.

As a workaround, you could consider creating your notes in the Tasks folder or create an additional Tasks folder for it.

When you decide to create your notes in your existing Tasks folder, you could prefix their subject with “Note:”, use a Category or any other sorting or filtering method to prevent them from mixing up with your regular Tasks.

Also, don’t forget to mark them as “Done” to prevent them from showing up in the To-Do Bar in Outlook or pop-up a reminder.

As I’ve also highlighted previously, using OneNote would be a real alternative to the (age-old and no longer developed) Notes section in Outlook.

Aside from having additional features, OneNote is also accessible in a browser via OneDrive (formerly known as SkyDrive) and there are free apps available to also sync your Notes with iPhone, iPad, Android,  Windows Phone and Windows 8 devices.