I've got a long Distribution List (or Contact Group as they are called now since Outlook 2010) to which I want to send a message to.

As I don't want to use the BCC field and actually also might want to address the messages personally, I looked at using the Distribution List as the source for my Mail Merge.

Is this even possible?

It is not possible to do this directly as a Mail Merge option but with only a view additional clicks you can easily use a Distribution List or Contact group as the source for a mail merge.

The trick here lies in saving your Distribution List as a txt-file. This will create a tabs delimited file with all the names and address of the contacts that were added.

Once you have the txt-file, you can start the Mail Merge from Word and instead of selecting and Outlook Contacts folder as the source, you can select the saved txt-file.

Word will automatically recognize the tab separation as columns with the first column named “Distribution_List_Name” or “Contact_Group_Name” and the second column is named after the actual Distribution List or Contact group name as it showed in Outlook.

The names of these columns can be used to insert the greeting and address your messages. 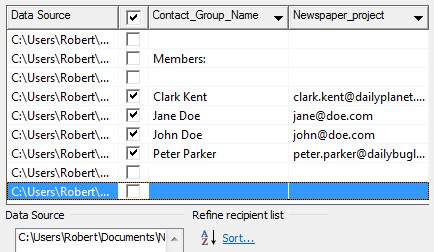 With a small detour, a Distribution List or Contact Group can be used as the source for a Mail Merge as well. (click on image for the full dialog)

Important: There are a couple of white lines and a “Members:” line added to the text file which you must deactivate when selecting your contacts (see screenshot above).

Extra tip: If some of the records in the txt-file also hold the email address for the name or another error, you can quickly modify them without leaving Word by selecting the txt-file in the “Data Source” field and press the “Edit…” button in the bottom left corner.

If you need to use Mail Merges for Distribution Lists more often and don’t have the need to convert them into separate contacts, then one of the below add-ins might be interesting to you and allow you to perform the merge even quicker.

Send Personally by MAPILab
The Send Personally add-in automatically does a mail merge for you. Simply add all the recipients and distributions lists in the “To:” field like you normally would and send via the add-in’s “Send Personally” button. You can use a variable in your greeting line, or anywhere else in the message, which will get replaced by the recipients name. Sending out with an attachment is also supported. 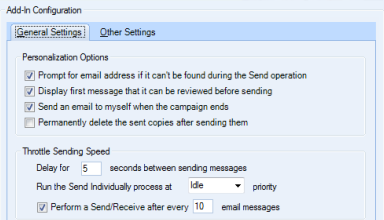 Some of the options in Send Individually by Sperry Software.