I sometimes see announcements about new features being added or fixes being made to Office 2016. However, I don’t seem to get them.

When I compared my build number of Outlook 2016 to the one of a friend, I saw that his was newer. I chose File-> Update Options-> Update Now and I got the message “You’re up to date!”

How can I force Outlook to install the latest updates?

Microsoft 365 Apps (previously known as Office 365) has multiple update channels. Based on which channel you are in and which license you have, you’ll get certain updates sooner or later than others.

Depending on your subscription and installation type you can control which channel you are in.

The following Office Update Channels, newest to oldest, are available.

Which Channel am I in?

You can see which Channel you are in by going to; File-> Office Account

Next to the About Outlook button, you’ll find which version and build number you are currently using and which Update Channel you are in. If nothing is specified, you are in the Current Channel.

If you don’t have this section at all, you are using an MSI-based installation.

The Current Channel is the official up-to-date stable release of Microsoft 365 Apps. This is where you want to be as someone that just wants to use the latest version of the Office software.

Feature updates are released once a month (usually at the end of the month) and can contain new features that have been publicly tested by the users in the Beta Channel and people in the Current Channel (Preview).

Any security updates are released on the second Tuesday of the month (which applies to basically all Microsoft products).

If needed, additional stability updates could be released in between as well.

The Current Channel (Preview) and Beta Channel releases give you early access to changes and new features that will most likely make it into the Monthly Channel release in about 1 or 2 months time.

So if you don't want to waste your time with these kind of surprises, it is best to remain in the Current Channel.

The Monthly Enterprise Channel is similar to the Current Channel but it gets the feature updates and stability updates together with any security updates on the second Tuesday of the month.

This makes its release schedule more predictable and manageable for Enterprise environments.

Because of this, the release is 1 version behind the Current Channel release but with extra stability updates.

Another benefit of this Channel is that it is supported for 2 months so you have time to plan the feature update while the previous version still gets its security updates.

This build is recommended to be assigned to a select amount of people within a corporation that has decided to use the Semi-Annual Enterprise Channel.

The Semi-Annual Enterprise Channel will only receive 2 updates per year and will receive the updates with a delay as well.

This Channel is recommended for environments that can’t receive updates and feature changes all the time. This release is supported for 14 months after its release date which means that you could even skip a release (with 2 months for implementation left or 6 when combined with Semi-Annual Enterprise Channel (Targeted) as that gets released 4 months earlier).

Detailed information about the Semi-Annual Enterprise Channel can be found in the Microsoft Docs article: Overview of update channels for Microsoft 365 Apps.

Updates are being released monthly via the same way as Office 365 installations (so not via Windows Update) but these usually only contain fixes and not new features that are being made to Outlook/Office users that are using it as part of an Office 365 subscription. So feature wise, it will remain pretty much the same as when Office 2016/2019 was first released.

Updates are being released monthly but these usually only contain fixes or changes that have been reported or requested by Volume License customers. Feature wise, it is even more behind than the Semi-Annual Enterprise Channel, especially when compared to features that depend on Office 365.

It is serviced via the same Click-To-Run mechanism of Microsoft 365 but the Volume License version is forever stuck at Version 1808 and basically only gets stability and security updates.

This makes its code-base very stable so that you can run it in situations for which even Semi-Annual Enterprise brings too many changes.

It is also missing various Microsoft 365 features but Outlook 2019 does support Microsoft 365 Groups and Focused Inbox. It does not have a full Dark Mode; The Black Theme still has a white Reading Pane.

It is also serviced via the same Click-To-Run mechanism of Microsoft 365 but the Volume License version is forever stuck at Version 2108 and basically only gets stability and security updates.

When you are an Microsoft 365 Family or Personal subscriber, you can switch between the Current Channel and the Beta Channel or Current Channel (Preview), which used to be known as Insider Channels, by using the following commands within any of the Office applications; 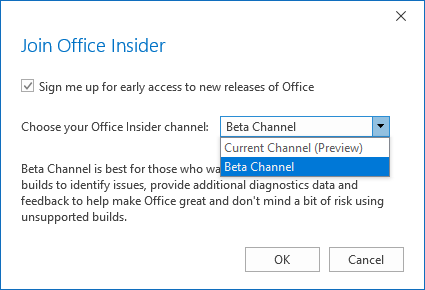 Switching between Release Channels: Office 365 for Business, Enterprise and University

When you are an Microsoft 365 for Business, Enterprise or University user, the Channel that you are in is being determined by your Office 365 Administrator.

As mentioned previously, you can see which Release Channel you are in by going to the File-> Office Account section of any Office application itself.

Administrators can select in the Microsoft 365 Admin Center who will be in the Targeted Channel by going to; 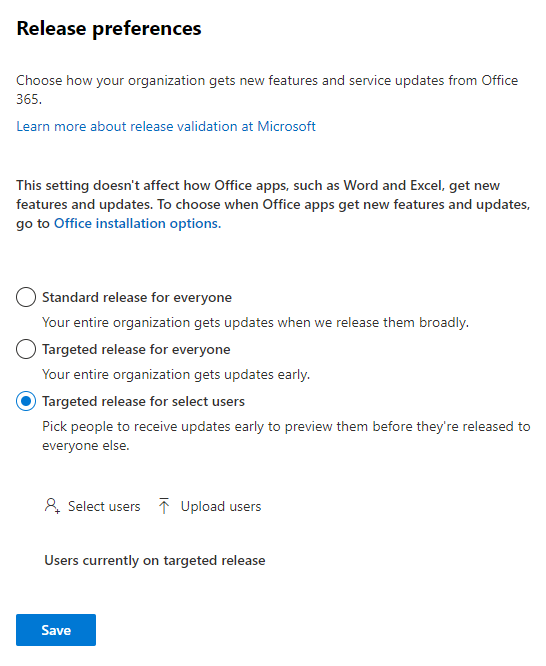 Enabling Targeted Channel in the Microsoft 365 Admin Center. Here the Preview Channels still are referenced by their old name; Targeted. 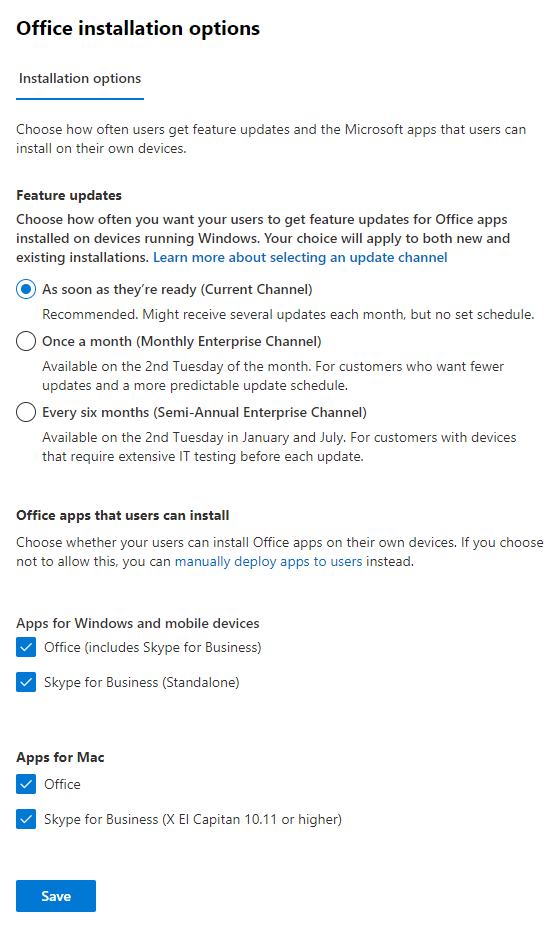 All these software deployment settings can also be controlled via customized installers and/or Group Policy settings;

You can choose between the following values:

To let users switch to Office Insider builds themselves, just like for the Microsoft 365 Family and Personal subscription, you can enable the Office Insider button with the following Group Policy setting;

To set these values directly via the Registry instead of a Group Policy see: Switching between Microsoft 365 Apps for Business/Enterprise, Current, Preview and Beta Channel (Office Insider) without re-installing.

If you would like to enable users to select any or only specific Updates Channels (not just the Insider Channels), then you can enable the Update Channel button with the following Group Policy setting;

To set these values directly via the Registry instead of a Group Policy see: Let users decide their Microsoft 365 Apps (Office 365) Release Channel.