For my work, I regularly work with files that are blocked by default by Outlook. I've been able to unblock them via the Level1Remove Registry value but then I'm still being prompted to save them to disk first before I can open them.

I understand that completely unblocking them poses a certain risk, but as these are mainly shortcuts (lnk-files) and script files (such as vbs-files, which I've configured to open with Notepad by default), my increased productivity will outweigh the theoretical increased risk by this change.

Is there any way to completely unblock these Level1 attachments?

Restricting access to directly executable file types is a measurement which has been implemented for good reason but quickly becomes annoying when you really do want to gain access to legitimate files which are being blocked.

Unblocking them via the Level1Remove key is a commonly used workaround but as you still need to save the attachment to disk first, it is a cumbersome process when you need to do this on a regular basis.

There are 2 other workarounds which you can use to prevent this step: 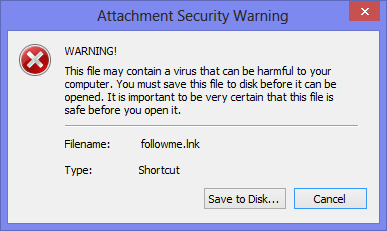 Unblocking Level1 attachments still requires you to save them first.

Important! Always evaluate the email you receive and any attachments listed before trying to open them and don’t simply trust the attachment by its name. Contact the sender about the contents if you did not expect his/her email to contain an attachment.

Request to send as a ZIP-file

Your first workaround should be to request the sender to always send these type of files in zip-files. When you receive a zip-file, you can directly open them with a double click and with another double click you can open the included attachment.

This will remove the need to manually save the attachment to disk first, then browse to that location and then finally execute the saved attachment. At the same time, you maintain the default security recommendations and prevent any accidental execution of other files of the same type which are infected.

To permanently unblock a blocked attachment type and also to prevent it from showing a “Save As” dialog prompt when opening it, you need to set all of the following Registry values:

Download: Registry file example for Outlook 2010 unblocking lnk- and vbs-files
(open in Notepad to view and/or edit or double click the reg-file to import it)

Instead of using the above mentioned Registry values, you can also set these options by using Outlook's Group Policy Templates if it is supported by your edition of Windows or are an administrator and want to deploy these settings.

You can find the options under:

Note: Even after setting this Registry value or Group Policy, you still could be prompted when opening the file (but not to save it first). To disable this prompt see: Do not always ask before opening this type of file