I sometimes tend to forget to include the promised attachment when sending a message or the subject of a message.

Is there any way that Outlook can remind me of this?

There are various VBA scripts available for this and also various add-ins but there is also a free add-in solution directly from Microsoft. It’s called Forgotten Attachment Detector (FAD) and is a (discontinued) development project of Microsoft Office Labs.

The results from this development project have resulted in the native “forgotten attachment reminder” functionality in Outlook 2013.

The Forgotten Attachment Detector add-in not only detects direct phrases such as “see attached” but it can also detect forgotten attachments by certain combination of words that you have used and are near each other in a sentence.

For instance;
If the words “attached” and “file” are used in a combination such as “Attached you’ll find the requested file”, you’ll get a reminder as well.

This method makes sure that you won’t get prompted yourself when you are mailing to someone “You’ve forgotten the attachment.” It also ignores the original text when replying so you are not being prompted then either. 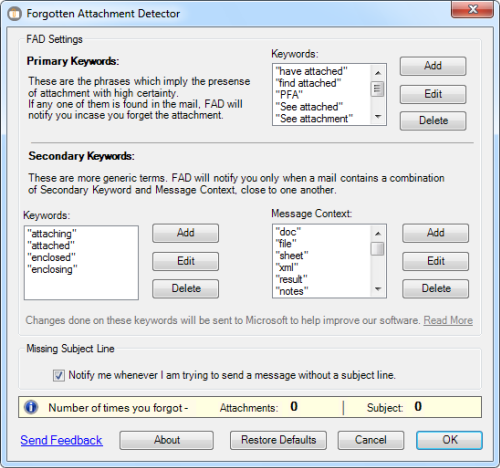 In addition to remind you of forgotten attachments, it can also remind you when you forget to put something in the subject field.

As said, FAD is completely free but it only works with Outlook 2007 or Outlook 2010.
Also note, that it will send (anonymous) usage information to Office Labs about which trigger words you have configured in the add-in and how often it has kicked in and reminded you. The obtained information will be used for research purposes only.

Download: Forgotten Attachment Detector (original copy as the official research project page has been taken off-line. One of the developers hosts a copy as well)

In addition to remind you of an empty subject, Outlook 2013 also reminds you when it thinks you forgot an attachment.

It is not as configurable as the FAD add-in but the results from that research project determined in part how the detection should work in the background. Just like FAD, it works based on specific words which should also exist in a certain contexts.

Example: Just the words “See attached” will not trigger it but a phrase like “Please see the attached files enclosed with this email.” will.

The detection is enabled by default but can be turned of via:
File-> Options-> Mail-> option group: Send messages-> Warn me when I send a message that may be missing and attachment 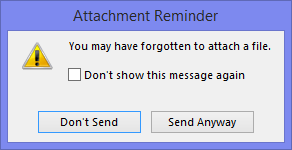 Other solutions or when using Outlook 2003 or previous

If you do not like it that your usage information is sent to Office Labs or if you are using Outlook 2003 or previous, there are quite a few of other add-ins out there which also offer this functionality. For instance;

A VBA example can be found here. If you go for a VBA solutions, do not forget to sign your code so you won’t have to lower your security settings or have to deal with security prompts.