I received an interesting message which I wanted to read later so I've let it Unread but now it is gone.

I’ve found out that it was recalled by the sender but I don't think it should have been for reasons I won't go into here.

Is there any way I can still get this message back?

Ah, the “Recall This Message” feature… It’s been the topic of many endless corporate discussions about to what extent it is legally allowed to have this feature and how to handle it.

Laws are different in every country so I'll just stick to a small disclaimer about the feature itself and then show you how you can still get back the recalled message.

The Recall This Message feature isn't a perfect cover-up and neither was it intended to be.

It is basically just a helpful end-user tool to mask some honest mistakes under the right circumstances. Under the wrong circumstances, it can have the opposite effect as discussed in; Recall a sent message (and why it will probably fail).

In all cases, it leaves a trace!

If you need something that works reliably, there are Exchange level features such as In-Place eDiscovery (Compliance Search) to really clean up a messy situation. This however requires you to talk to your Exchange administrator and/or Compliance Officer as these aren’t end-user features.

The Recall feature only works within an Exchange environment and even then there are restrictions to whether it will work or not.

In this case, it worked and this is what happened in the background in a simplified representation;

Under the perfect circumstances, the recipient of the message never noticed that this message was received and neither that is has been deleted shortly thereafter.

However, since the message was (briefly) stored within the mailbox and then hard deleted, it would still show up when using the Recover Deleted Items feature; 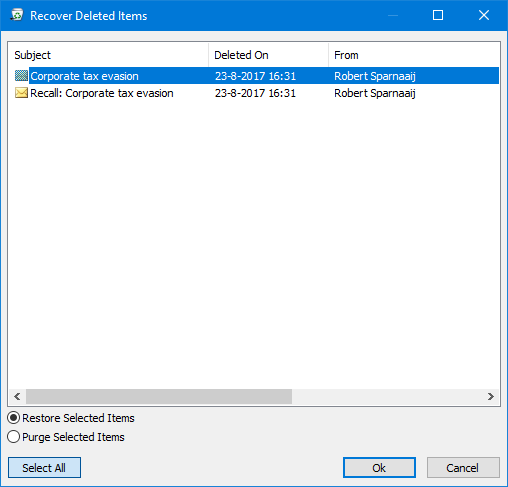 You’ll now see a dialog with all the Outlook items that have recently been deleted from your mailbox but are still in the Retention Period set for your mailbox. How long this Retention Period is, depends on the chosen settings of your company, but for Office 365 Exchange Online the default is 14 days.

The message will be restored either to the Deleted Items folder or the folder that the message was deleted from. Due to synching delays, it may take a minute for it to show up.

As you’ve now recovered the message, the recall has actually failed and the sender will receive a Recall Failed notification even when he/she first received the Recall Success notification.

If you don’t want this to happen, select the special Recall message first, select the option “Purge Selected Items” and press OK. You can now recover the original recalled message without notifying the original sender so it will still show that the recall was successful for them.