The “Ignore” and “Move Conversation” actions are indeed not exposed as rules but still can be disabled via any message in a conversation or for all conversations at once. 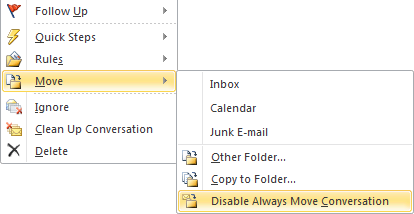 Disabling a conversation Move action can be done via the context menu.

Stop ignoring or moving any conversation

If you want to stop all the moving and ignoring actions for any conversation that still have active “mute” actions applied, start Outlook with the /cleanconvongoingactions switch.

Note the space in the command listed above. In Windows 8 you can just start typing in the Start Screen and the Search/Run field will automatically show up.

Note: Unlike disabling the “Ignore” button manually, this command line will not move any messages from the previously ignored conversation from the Deleted Items folder back into the Inbox folder.

Reset all conversation actions by starting Outlook with the /cleanconvongoingactions switch.