Now that I’m using Outlook 2010, I’ve noticed that I have 2 contacts folders by default; Contacts and Suggested Contacts.
The result is that my contacts are now split over 2 folders as well with some being duplicates and containing different information in the different folders.

How can I get my contact management back to a single folder?

The Suggested Contacts folder is a replacement of the nk2-file which was used in Outlook 2002/XP, 2003 and Outlook 2007 to save addresses in of people you have emailed to.

In contrast to the nk2-file, its contents has been made more visible via the Suggested Contacts folder and its contents will also not get deleted automatically when it fills up. The result is that this folder can become quite full and contact management can become confusing without cleanup.

The Suggested Contacts folder should be seen as a “temporary catch folder” for contacts and addresses which you might not have stored in your Contacts folder yet. You should not edit your contacts from this folder but rather move them to the Contacts folder if you want to keep this contact or add additional information to it.

A difference with the nk2-file is that the Suggested Contacts folder tries not to contain addresses of people you have emailed to which are already in your Contacts folder or in another address list in your Address Book. However, this system does not always work when the addresses have been saved under a different name or when only the email address has been used to address an email. The result is that a contact may exist in both folders with different information.

While it is great that Outlook catches all these addresses for you, you might want to regular review the content of the Suggested Contacts folder and clean it up when necessary. This will keep your main Contacts folder up-to-date and Outlook will stop suggesting names of people you are no longer emailing with.

Another good reason to keep your contact management restricted to a single Contacts folder is because most mobile phone sync applications can only sync with Outlook’s main Contacts folder and will ignore the contacts stored in other folders. 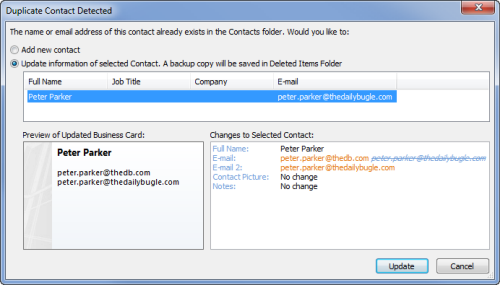 When updating an email address, the former address will be pushed to the “E-mail 2” field. (click on image to enlarge).